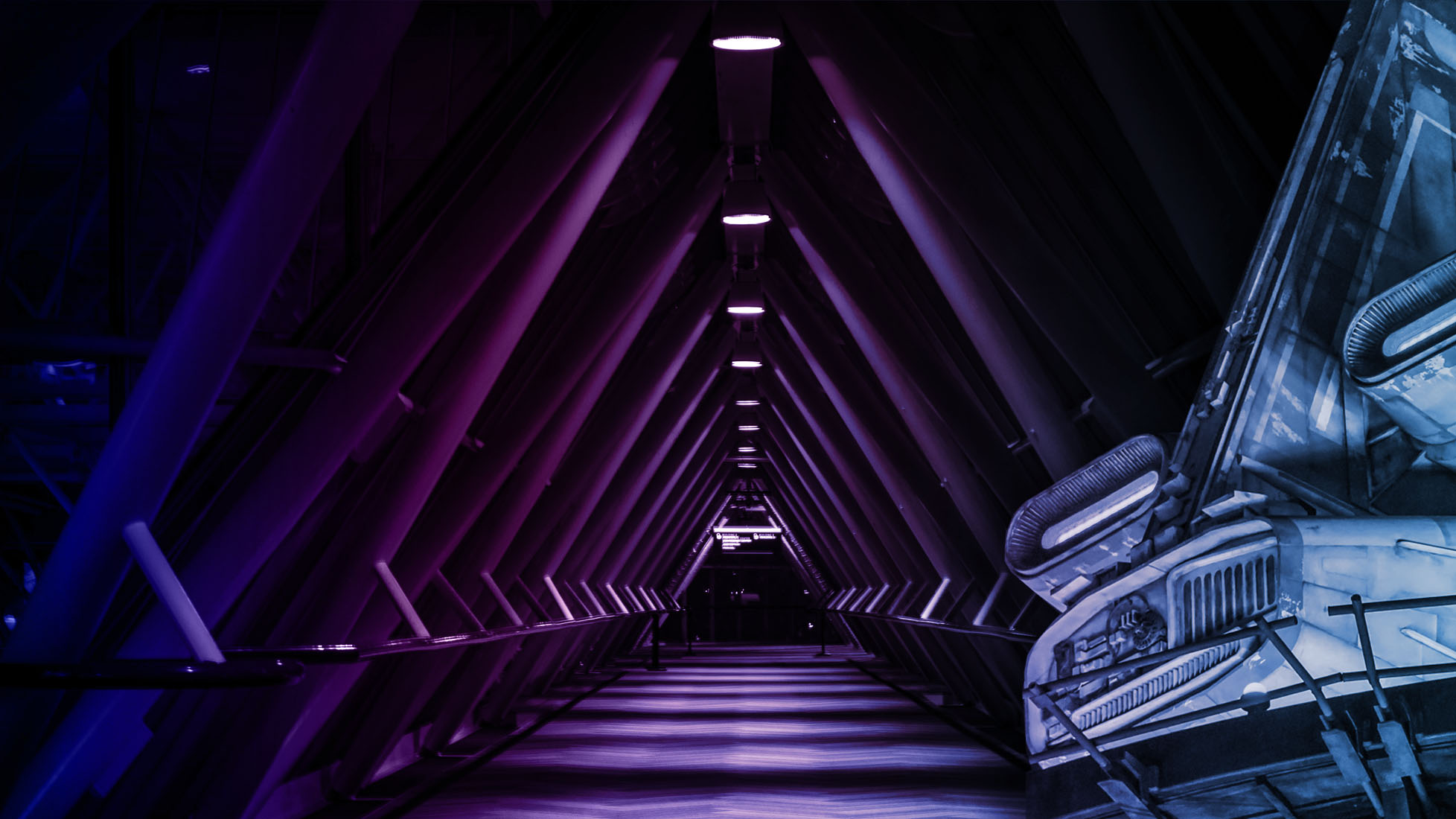 Kevin Groh’s The Commander: Guardian of the Utopia is set in a distant future, and a far-away galaxy reflects the harsh realities of our world today. Kevin is a gifted writer and a passionate gamer with strong morals and hard-hitting questions about life. After winning over his German fans, Kevin Groh is bringing his acclaimed Omni Legends series to the US’s sci-fi & fantasy readers. The Commander: Guardian of the Utopia is here to entertain and take the readers on an adventure and raise questions about our evolution as a species.

The book forces you to find the reflection of the hero within you. Learn more about Kevin Groh, his ideas, and his inspirations in this interview.

You’re a passionate gamer. How did that influence your decision of becoming a writer and creating your own universe, the Omni Galaxy?

The Omni Galaxy is my own interpretation of a future version of our milky way. My passion for gaming started when I was 7 years old. Ever since I have spent thousands of hours in fiction worlds and experienced countless stories and adventures. Every game and movie I consumed had its flaws and weaknesses that originated at the difference between the creator’s vision and my own. So one day I decided to draft my own universe the way I envisioned it. Since I was never really talented in the visual arts but very capable of writing, a book seemed to be the perfect medium for me to bring my stories and worlds to an audience. As soon as I decided to write books, every game I played and every movie I watched became more than just personal entertainment. I used them as an opportunity to dive deeper into new concepts and ideas and transform them into something new or find ways to include components into my own creations.

The most simple answer would be: Gamers are people that allow themselves to truly dive into fictional worlds and become something else during that time, which is exactly the kind of inspiration and determination one needs to create equally awesome stories.

How did you build the Omni Legends universe? What tools did you use?

After I decided to invest myself into writing, I got an authoring tool called Papyrus Autor, a German software product, and one thing helped me right away: the mind map tool. I started mapping the different protagonists and drafted some story ideas. Then I figured how those stories would connect. Since I write Sci-Fi and Fantasy, there had to be a way for them to coexist. So I decided not to have everything happen on just one planet but create an entire universe that allowed me to come up with any story I wanted and bring those characters together later on. So I drafted different star systems, galactic sectors, and planets.

Utopia was the second major world I created, and I needed to have the Commander story script ready beforehand because the flora, fauna, and everything else had to fit the story. Eventually, I needed a planet where humans could live. It also had to reflect human nature, and the changes inflicted by human presence.

How does “Omni Legends – The Commander: Guardian of Utopia” relate to the current situation in the world?

This first book in the Omni Legends series has many similarities to today’s society. It happens several centuries after today. Despite tremendous technological progress and alien contact, humanity itself has not changed. I have looked at human 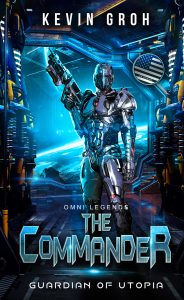 history and current events and realized that humans have evolved little from our ancestors 2,000 years ago. Society and human behavior are developing incredibly slowly so that even 300 years from now, we will still be the same as today. Society is driven by greed, egotism, and survival of the fittest, while moral codes are changing with the personal situation. That is why Utopia is governed by corporations, and there is still as much corruption and poverty as we have today.

This book contains a lot of semi-hidden social criticism by looking at the situation from the perspective of someone who is forced into military service and has to endure whatever the government demands. Powerlessness and perseverance, holding on to peers and trying to find a way in life despite all the hardships and challenges. I wanted to start the “Omni Legends” series by showing the origins of the Commander, a human that has to go through a lot to become the hero he is later to be known as.

What would you like to stay with your readers after they finish your book?

All my books contain thoughts and ideas that analyze or criticize things that are existing today. I want readers to question things in their lives, find parallels, and gain more awareness. I also want people to know that despite all problems in the world, it is still important not to give up. Keep on fighting for your dreams and make the best of every situation, for it will make you stronger.

Of course, I also want readers to enjoy the story, fall in love with the characters and places, and recommend the book to their family and friends. I have a huge amount of stories to tell, but that only works if people enjoy them. This is just the beginning of Carter’s adventure – there is much more to come!

Anybody who enjoys Sci-Fi, especially military sci-fi, will find this book a great read. Since the Omni Legends series is based on a superhero theme, everybody that is into comic books and heroic tales will also have a great time reading it. I am a gamer, and all my books are inspired by video games, movies, and all things nerdy. This is also a group of people that will find the story intriguing — nerds, gamers, geeks, and everything in between.

What do you enjoy most about writing? 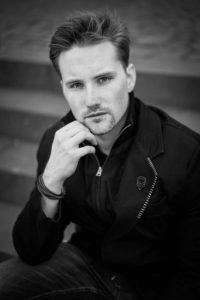 Writing—like every form of art—boils down to transferring ideas, emotions, and the true innermost nature of the artist out into the world. I am living fictional adventures in every waking hour and want to create a universe filled with incredible characters and stories that I enjoy myself. It makes me feel accomplished and also quite powerful to birth a world, a universe of my own that mirrors my inner self and all that I love and am passionate about. In a world where most of us feel like we have so many duties, and many don’t even know what makes them happy, creating a world that is entirely my own, where I can decide what happens, gives me a sense of power and also a purpose.

Nothing matches the feeling I have if someone is hyped about my stories and tells me what they love about it. If others love my work, that is the best feeling in the world.

What do you like most about your protagonist, Carter?

Carter is a lot like me. Of course, most characters reflect parts of their creator’s personality, but Carter was the second character I really felt connected to myself. He starts out as a privileged but regular guy that is smart, has a strong moral compass, and questions things. He is then forced into military service and realizes that, despite the tough surroundings, he loves being a warrior. So he owns the role and dives into it, wanting to be the best. He has weaknesses, his family isn’t perfect, he is authentic. Carter is doubting himself, he is scared and insecure, but he still finds the strength within himself to overcome the fears and grow as a person. In many ways, this is the same path I am going now. I imagine other people are experiencing it, too. Carter becomes the first hero in the series, but he starts out as just a normal guy, which makes him approachable.

There is a hero, just like Carter, dormant within us. How can one unleash the hero within?

Heroism is, in many ways, a philosophical concept. It is not about being all-powerful or defeating evil; it isn’t even about helping others, necessarily. Heroism means that you think about life and your role in it; that you define yourself according to your own values and beliefs. Heroism is a matter of perspective. Someone who is a hero for one person can be the devil for another. Heroism is the strength of character, humbleness to admit mistakes, and wisdom to know the difference. If you are true to yourself, honest with yourself, and you live the best life you can, you will be a hero for someone. A hero keeps going, sticks to their convictions, and defend what’s right even at a high host.

What is your favorite quote from the book?

“You humans are not alone in the universe. Just because the cultures you know fight mainly with firearms doesn’t mean there aren’t any other beings out there.” – Jazzir.

This quote always makes me wonder. It is a fascinating topic to think about what other species may live out there in the infinity of the stars. Humans are very self-centered and tend to believe they are the smartest and most powerful beings, but there may be countless other creatures that could be smarter or more powerful than us. I enjoy thinking about what aliens there might be and how they differ from us, or what they may think about us, how they would react to us.

What is your role as a writer in today’s world?

Most of us spend a vast amount of our time working and fulfilling our duties and responsibilities. We should dedicate the rest of the time to the things we love and enjoy. My job as an author is to provide exciting stories that are worth the readers’ time and attention. I want to make people enjoy my books and have a good time. I want to help them escape reality for a while and forget their sorrows by immersing themselves in my universe.

I provide entertainment and joy, which is one of the most valuable things we can have today.

Tell us more about the “Omni Legends” book series and what to expect next.

The Omni Legends series will contain stories from Sci-Fi and Fantasy genres, built around the superhero concept. All stories will happen in different worlds belonging to the same galaxy, and characters will meet across books and planets and tackle menaces that go beyond just one species or star system. There are almost 40 books planned at this moment, with the four-part Commander subseries starting the storyline. After that, I will introduce new worlds and characters such as the Black Wanderer and the Shadow Guard.

The next book will be the second part of The Commander. Carter’s story continues during his time in the human military and the special forces where he has to face corruption and war while exploring his heritage as grandson of a military legend.